Stop Running to Failure: A Tip for Extrusion 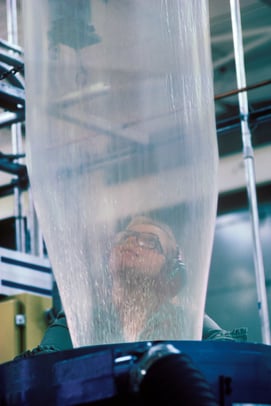 Extrusion processors often overlook the importance of purging compounds.  Processors working in extrusion blow molding, blown film, cast film, profile, & sheet extrusion all stand to benefit greatly from introducing purging programs into their maintenance. For the past five years, we've been introducing our N-Series line to companies focused on those processes. In many cases we perform testing at the prospect/customers plants.

We often find that extrusion companies that haven't yet embraced purging instead run to failure.  I experience situations like this blown film bag maker that wanted a miracle cure to prevent a tear down.

I recently had a chance to introduce this bag maker to our NCR chemical grade to remove carbon from his line. When I arrived at his plant, I found out that the line we were going to test on had not been cleaned in over a year. Unfortunately, the machine and die were so dirty that no purge compound would have succeeded.  It ended up requiring a 36-hour teardown. That complete (and incredibly costly) teardown was required maintenance.

My question is, why?

The costs of the line being down for a day and a half, not making good production along with the labor, wear and tear on the equipment can costs thousands of dollars. By installing a quality purge regimen, the contaminants do not have a chance to bond to the steel and you can extend the life of a machine and save the costs associated with tearing down a line for carbon contamination.

Everybody has to start somewhere.  Making small, incremental changes in your maintenance can have a compounding effect on your efficiency and profitability.