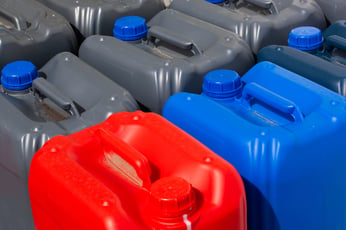 Blow Molding is a unique form of plastic processing. It’s of course very different from Injection Molding, Blown Film, and a host of Extrusion applications including profile, pipe, wire coating, sheet, cast film, etc. But at its core it shares the same basic principle, melt plastic resin and mold that plastic into a product. There are a ton of different ways to process plastics and after being in sales in the plastics industry for over 8 years now I can’t help but notice patterns that have developed in plastic processing.

One of these patterns that I’ve seen countless times is that many blow molders have been hesitant about introducing a commercial purging compound into their plant and hesitant to set up a purging program that can save enormous amounts of money (if done correctly) with the right type and grade of purging compound. I’ve encountered many blow molding facilities over the years and not many of those use purge on a regular basis.

When I speak to blow molders I usually hear that they use next resin, or same resin just running to natural if it is a color change, or regrind if there is enough available and even then it is loaded in at a certain percentage with their commodity resin. What I also tend to hear a lot is that they can run for hours on certain changeovers before being ready to go back into part production. And I understand that regrind is a large part of this industry but the scrap has to be processed down to create regrind and then you have to be careful how many generations of regrind you are putting back into the part so not to effect melt flow during production.

From the outside looking in, I can see a tremendous amount of machine time being wasted just to run scrap until the changeover can be complete. Machine time that could be used to make good quality parts if the correct type and grade of purging compound is used for material changes, color changes, shut down and seal, and to clean out contamination. Not to mention that cheap commodity resin is no longer cheap after the soaring costs of raw material resin prices that we have seen over the past several months. I know of some plants that are having to be rationed right now due to not only the cost of resin but the shortage in supply as well. That sort of thing will result in a tangible negative effect on production and planning. Some of that pain can be greatly reduced by implementing a purging program.

Commercial Purging Compounds have come a long way over the last several years with new grades engineered for specific processes or resins. The processor has options in purge selection now that they didn’t have years ago. From mechanical, chemical, and hybrid type purging grades to a wide array of different carrier resins and base resins to best match the material being ran at blow molding facilities. We now even have the new Asaclean PLUS Grade which is a concentrate that can be blended with your production resin at a low percentage and ran through the entire system as a chemical type purging grade.

With the PLUS Grade a processor can eliminate the worry as to how closely the carrier resin of the purge matches the production resin MFI. Processors can create a high-quality commercial purge compound with their own production resin and the help of the PLUS Grade.
We have seen drastic cost savings from shops that have implemented the right purge and just as importantly the correct purging procedure. You can see your changeover time drop by HOURS in some cases which will save money by greatly reducing the amount of downtime from good part to good part and potentially save hundreds of pounds of commodity resin. If there has ever been a time to introduce a smart purging program for Blow Molders, now is the time.

Learn more about how to reduce production downtime and protect your profits with a purging compound.