Half the Purge, Double the Savings: Reducing Scrap in PVC Extrusion 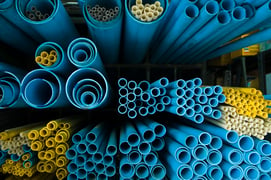 An extrusion company asked us for a consultation to assist in purging rigid PVC from extruders, single and twin screw. Their current method used a powder purge that could also be run through the die. They had pretty strict selection criteria.  They would only make a change if their new purge: 1.) improved cleaning power and removed contamination, 2.) could be used to seal the machine during shutdowns, and 3.) would avoid contamination at start-up--a very common issue for PVC.

This application for purging rigid PVC carried the standard concerns for the material: avoiding temperature increases to prevent degradation of the PVC, and ensuring that the PVC itself is able to displace the purge to be able to return to production without delays due to residue. The user intelligently set about running tests first on the 3.5 ”single screw extruder, before running the same test on the twin screw extruder. This decision allowed them to observe the behavior of the new purge in the simpler of the two extruders, as a flow and displacement test with the purge and PVC. If satisfactory, they’d then try it on the twin screw extruder, which is larger in barrel capacity and a bit more complex in design.

A mechanical purge grade was recommended, since mechanical purge does not require increases in temperature to function properly, and being a grade approved for rigid PVC it would be easily displaced by the resin, leaving little to no residue issues.

The result was better than expected, achieving cleaning with approximately 20 lbs. of Asaclean, when the previous method took 40 lbs. On top of the 50% savings in purge quantity, they obtained a 20% reduction in the cost of the purge consumed per application, plus additional savings due to the reduction of both start-up time and scrap compared to the previous method.