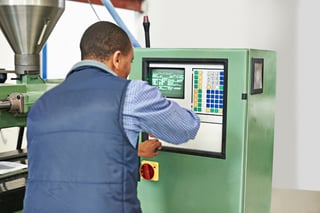 Back Pressure in an injection molding process is often defined as “the resistance of the screw to recover as the metering section pumps molten plastic through the non-return valve to the front of the screw.”

Too much decompression can result in excessive air being pulled into the melt stream.  This can result in bubbles or splay in the molded part.  As a general rule, the amount of decompression should not exceed 1 ½ times the travel of the check ring.  As backpressure is increased, the time for the screw to recover to set-point is increased.  Screw recovery speeds should be increased as well to maintain cycle time.

Backpressure is required to insure a consistent “shot” of material each cycle.  It also provides a good homogeneous blend of your resin.  This helps to mix any additives or colorant and gives a more uniform melt temperature throughout the shot.  It had long been the belief in the industry that raising backpressure also raised the melt, but much of the data now points to screw RPM’s having the larger impact on melt temperature.

There are two notable benefits of backpressure that are often overlooked. They occur during color changes and purging.  When purging the injection unit from one color to the next use enough back pressure to keep the screw on “bottom” while purging.  With the screw all the way forward and a medium to high back pressure setting, rotate the screw.  The backpressure will insure that the trailing edge of the screw flight will be addressed while purging.  This can be exhibited by the previous color showing up again after re-starting.

Pay attention to your backpressure.  It’s a simple thing that can have a dramatic impact on the success or struggles of your process.