3 Reasons Purge Compounds are Critical for Beating Your Competitors 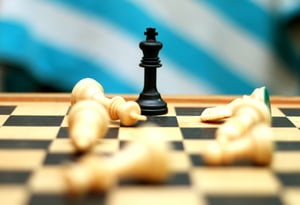 You know that a high-output of an injection molding press or extruder builds up carbon contamination over time. You probably also realize that pushing through color after color results in high scrap rates and excessive production downtime.

With an ever-increasing demand for the products produced in your facility, you need an on-point purging process that improves your ability to churn out product and turn a profit.

The following three reasons exemplify why commercial purging compounds are so critical to improving operations:

Using the next resin immediately behind the first one – and continuing the production run until the color or resin is changed – is ineffective and inefficient, as well as a waste of time and material.

Production resin is not made to clean machines, because it doesn't remove color or the previous material effectively. When using resin for color/resin changes, it layers over any resin or color deposits already in the barrel, eventually causing color and carbon contamination.

Prolonged color or resin changes mean longer downtime, resulting in a higher cost of production. Using an effective commercial purging compound to eliminate the residue of the first material or color results in a competitive advantage due to greatly reduced changeover times and material waste reductions.

Most purging compounds are designed to remove stubborn carbon and color deposits on the root and flights of a screw. A high-grade purging compound also reaches those dead spots within the screw/barrel assembly that virgin resin simply cannot address.

Any remaining resin within the barrel, under heat, degrades and eventually causes carbon contamination. These black specks result in a high scrap rate, material waste and a huge loss of productivity.

To make the most of your purging compound, in terms of reducing carbon contamination, establish a periodical, preventative purging program. This type of routine maintenance ensures you avoid carbon contamination buildup in the barrel and screw, effectively reducing machine downtime.

Do not use the next resin or regrind to clean injection molding machines and extruders. These products are not designed to clean. Using these materials typically results in even more scrap and waste.

Outdated cleaning methods – like flushing an injection molding machine with a next resin or regrind – are ultimately time-consuming, material-wasting and ineffective in removing color and carbon contamination. The resulting plastic scrap and production downtime drain your efficiency and profitability.

Most if not all plastics processing facilities would benefit by using a commercial purging compound instead of scrap or next resin methods.

Ready to verify the significant cost savings you'll see from investing in purging compounds? Click here to schedule a 15-minute consultation with a Purging Process Expert at ASACLEAN.