3 Easy Ways To Stop Your Purging Compound From Leaving Residue 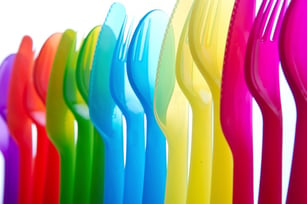 As a plastics processing company, you know that contamination and resin purging residue are costly, both in the amount of product that cannot be sold and the resulting production downtime between resin transitions.

You need a purging compound that allows you to transition from one color to another quickly, so your production runs are smooth and on schedule. With the right purging compound and purging process, contamination, scrap rate and production downtime are controlled or completely eliminated.

The following are three simple ways to prevent your resin transitions from leaving residue and contamination, ensuring scrap rate and downtime are no longer an issue:

The melt index (MI) of your resins is a major factor in purging residue issues, especially if the purge is much stiffer than the next resin. MI is the first characteristic to consider when selecting a purging compound that’s going to effectively purge resins and contamination.


2. Use The Recommended Temperature Range For The Purging Process

Purging process temperature and MI are the most consistent indicators of how to successfully eliminate residue. That’s why it’s critical to use the recommended temperature range for the purging compound and resin.


3. Be Aggressive When Displacing The Purge
When purging resins, you may be worried about using too forceful of screw speeds or back pressure. While your concern is founded, some assertiveness may be needed when purging certain resins like Bayer’s Texin, Desmopan (TPU) and Makrolon (PC).

If you’re experiencing issues with residue when changing production resins, low-to-medium back pressure and screw speeds are often to blame. To help minimize residue, follow these easy but effective steps:


With the cleaning power of a proper purging compound and purging process for your resin transitions, preventing residue is easy for your crew. Using the right purging procedures helps you gain back machine capacity and experience a significant scrap rate reduction. Contamination is eliminated, your residue issues are resolved and your production runs are smooth and efficient as you switch from color to color on one machine.

Ready to learn more about how to achieve successful resin transitions without residue? Discover why purging compounds and process efficiency must work in tandem.